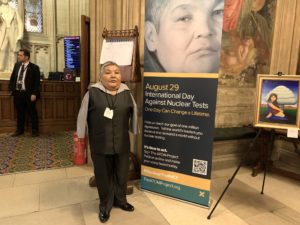 LONDON – The ATOM Project Honorary Ambassador Karipbek Kuyukov will spend Sept. 8 through Sept. 15 in London and Edinburgh meeting with officials and sharing the message of nuclear disarmament.

Kuyukov is uniquely suited to spread the message of a nuclear-weapons-free world.  He is among more than 1.5 million Kazakhs impacted by more than 450 nuclear weapons tests conducted by the Soviet Union on the Semipalatinsk Nuclear Test Site on what is now the territory of Kazakhstan.

The site was shut down Aug. 29, 1991 at the direction of Kazakhstan’s First President Nursultan Nazarbayev. The country then went on to renounce what was then the fourth-largest nuclear arsenal inherited from the Soviet Union.

But the damage of those nuclear tests persists to this day. Kuyukov was born not far from the nuclear test site. He was born without arms as a result of his parents’ exposure to weapons testing. He has overcome that challenge, however, to become a renowned artist and internationally recognised nuclear disarmament activist. He has devoted his art to capturing the images of nuclear-weapons-testing victims and his life’s work to ending the nuclear-weapons threat.

As The ATOM Project Honorary Ambassador, Karipbek has traveled the world sharing his personal message, the example of Kazakhstan in choosing a path of peace and the urgent need for a nuclear-weapons-free world. Kuyukov began his week exhibiting his art at the UK Parliament in cooperation with an event by the Campaign for Nuclear Disarmament (CND). The event included the participation of CND General Secretary Kate Hudson, and CND Patron and poet Antony Owen. 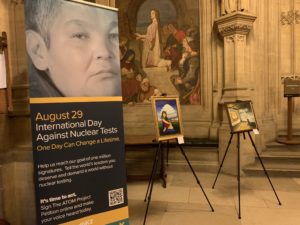 Kuyukov will also be visiting Edinburgh and the Scottish Parliament where he will be meeting with Deputy First Minister and Cabinet Secretary for Education of Scotland John Swinney. Kuyukov will also share his story and that of Kazakhstan at the Parliament as well as present an exhibition of his paintings.

His tour will then take him to Manchester where he will meet with the Lord Mayor of Manchester Councillor Abid Latif Chohan. He will also be meeting with high-level regional and national nonproliferation and peace activists.

Karipbek’s trip will end with an exhibition at the Representative Office of the Foundation of the First President of the Republic of Kazakhstan – Elbasy in London. The event will include a screening and discussion of the ‘Where the Wind Blew’ film co-hosted by Chatham House.

“The United Kingdom remains a key component in achieving a nuclear-weapons-free world. I look forward to sharing my story and that of Kazakhstan to help demonstrate the benefits and potential of the world without nuclear weapons,” said Kuyukov.