Kazakhstan and The ATOM Project mark International Day against Nuclear Tests with moment of silence, a nonproliferation award and a nuclear-weapons-free zone conference

Kazakhstan and its global nuclear nonproliferation initiative The ATOM Project marked the August 29 International Day against Nuclear Tests by urging a moment of silence in memory of nuclear weapons testing victims, by awarding the Nazarbayev Prize for a Nuclear-Weapon-Free World and Global Security and by the Kazakh capital hosting a conference of nuclear-weapons-free-zone countries.

August 29 was adopted by the United Nations in 2009 as the International Day against Nuclear Tests. The day marks the date in 1991 when the then Kazakh leader, Nursultan Nazarbayev, shut down the Soviet-era Semipalatinsk nuclear test site. The Soviet Union conducted 456 nuclear weapons tests at Semipalatinsk, which polluted a wide area and caused early death, significant health issues and gruesome birth defects among more than 1.5 million people.

Each Aug. 29, The ATOM Project and its Honorary Ambassador Karipbek Kuyukov urge people around the world at 11:05 a.m. local time to observe a moment of silence in memory of nuclear weapons testing victims. 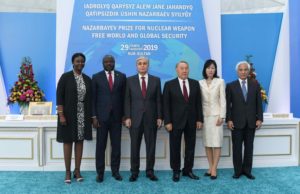 Kuyukov is, himself, a victim of weapons testing. He was born without arms as a result of his parents’ exposure to nuclear weapons tests at Semipalatinsk. He has since become a painter and internationally recognised nonproliferation activist who has dedicated his life and art to achieving a nuclear-weapons-free world. 11:05 a.m. was chosen for the moment of silence because at that time, analog clock hands form a Roman letter “V,” symbolising victory and the world continuing to seek victory over the nuclear weapons threat.

“I know first-hand the suffering that can result from nuclear weapons tests. The suffering goes far beyond myself and even Kazakhstan to all of the countries in which weapons tests have been conducted,” said Kuyukov. “On August 29 we remember those victims and pledge to work to ensure they will be the last.”

Also on August 29, Kazakhstan’s First President, Nursultan Nazarbayev, presented the Nazarbayev Prize for a Nuclear-Weapon-Free World and Global Security to relatives of the former Director General of the International Atomic Energy Agency (IAEA) Yukiya Amano, who passed away in July, and to the Executive Secretary of the Comprehensive Nuclear-Test-Ban Treaty Organisation (CTBTO) Lassina Zerbo in the Kazakh capital Nur-Sultan.

The Nazarbayev Prize was established in 2016 and is awarded to those who have made a significant contribution to global nuclear disarmament and security.
Presenting the prize, Nazarbayev praised the work of the two recipients and noted the dangers we all still face.

“More than 20 countries of the world keep potentially dangerous nuclear weapons or technologies and each of them can become a target for destructive forces,” he said.
Nazarbayev also urged the international community to abandon traditional thinking on nuclear weapons.

“We need to revise the archaic concept of strategic stability based on nuclear weapons,” he said.

“Heading the IAEA, Yukiya Amano played a key role in the creation of the low-enriched uranium bank in Kazakhstan and contributed to the settlement of Iran’s nuclear issue. The activities and efforts of Lassina Zerbo have resulted in the near completion of the international monitoring network for the comprehensive nuclear-test-ban treaty,” said Tokayev.

“A world free of nuclear weapons, including banning nuclear testing, remains the highest disarmament priority of the UN. Kazakhstan has been strong supporter in this task. I thank (Kazakhstan’s First President) Nursultan Nazarbayev for his commitment to this cause and the establishment of this prize. This year’s laureates, Yukio Amano and Lassina Zerbo, richly deserve this recognition,” said Guterres.

On the eve of the International Day against Nuclear Tests, the Kazakh capital also hosted a conference of representatives from the nuclear-weapons-free zones of Latin America and the Caribbean, Africa, South Pacific, Central Asia and Southeast Asia.

The representatives of the International Atomic Energy Agency (IAEA), the Comprehensive Test Ban Treaty Organisation (CTBTO) and Mongolia also attended. Participants discussed the challenges facing nuclear nonproliferation and how nuclear-free zones can contribute to the larger effort to promote nuclear disarmament and non-proliferation. They also reviewed the proposals to institutionalise the inter-zonal cooperation between the zones and efforts to expand the zones.

The seminar was organised in partnership with the United Nations Office for Disarmament Affairs (UNODA) and is part of the preparation work to the Fourth Conference of the State Parties to Nuclear-Weapon-Free Zones scheduled for April 24, 2020 in New York.