August 29: minute of silence in memory of victims of nuclear tests

The ATOM Project is calling for an international moment of silence during the August 29 UN International Day against Nuclear Tests in memory of all victims of nuclear weapons testing.

“We are calling for people around the world to observe 11:05 a.m. their 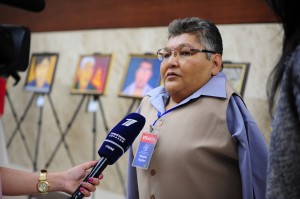 11:05 am was chosen because at this point the clock hands show a V, which stands for victory. This moment and the V-shaped angle are meant to signify a victory of common sense over fear and a victory for global efforts towards a nuclear-weapons-free world.

The United Nations International Day against Nuclear Tests was established on December 2, 2009 at the 64th session of the United Nations General Assembly by the unanimously adopted Resolution 64/35. The resolution was initiated by Kazakhstan together with several sponsors and cosponsors to commemorate the day in 1991 – August 29 – when President Nursultan Nazarbayev made a historic decision to close the infamous Semipalatinsk nuclear test site in East Kazakhstan, where 456 nuclear tests were conducted.

The ATOM Project seeks to galvanise global public support for the soonest entry into force of the Comprehensive Nuclear Test Ban Treaty (CTBT), which was opened for signature in 1996 and which has been signed by 183 states and ratified by 166 states. It is yet to enter into force, though, because it needs the signatures and ratifications of eight specific states listed in CTBT Annex II – China, Egypt, India, Israel, North Korea, Pakistan, and the United States.

More than 1.5 million Kazakhstan citizens have been seriously exposed to nuclear weapons tests, and to this day children are born with severe deformities, illnesses and a lifetime of health challenges. The ATOM Project and its Honorary Ambassador, armless artist and anti-nuclear weapons activist Karipbek Kuyukov put a human face on this global issue by telling the stories of the survivors of nuclear testing.

In a strongly worded Manifesto, “The World. The 21st Century” released during the 2016 Nuclear Security Summit in Washington, D.C., Kazakh President Nursultan Nazarbayev, challenged his global counterparts to commit to peace, dialogue, and renunciation of nuclear weapons. He warned there would be “no winners” in any modern war as it would inevitably lead to the use of weapons of mass destruction. As a result, the planet would end “as a graveyard of radioactive materials.”

It is the hope of President Nazarbayev and the people of Kazakhstan that one day all nuclear weapons will be eliminated. Until then, there is a need to observe International Day against Nuclear Tests as the global community works towards bringing about measures to achieve and maintain a nuclear-weapon-free world.