The ATOM Project Sponsors “I Have Only My Heart to Hold You: The Art of Karipbek Kuyukov” 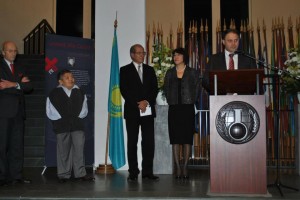 ASTANA, October 29, 2012 – The ATOM Project is sponsoring the art show, “I Have Only My Heart to Hold You: The Art of Karipbek Kuyukov,” at The Organization for Prohibition of Chemical Weapons, Johan de Wittlaan 32, 2517 JR The Hague, The Netherlands, from October 29 to November 5.

The ATOM Project, launched by President Nursultan Nazarbayev on August 29, 2012, is an international petition campaign designed to unify global public opinion in order to achieve a permanent end to nuclear weapons testing that features the tragic and hopeful stories of survivors of nuclear testing from the region of Semey, Kazakhstan, the site of more than 450 Soviet-era nuclear tests. The survivors and their descendants continue to suffer from illness, disease and severe deformities caused by exposure to nuclear radiation during and after the testing, which took place 100 miles outside of the city, then called Semipalatinsk.

Karipbek Kuyukov is an artist working in Karaganda, Kazakhstan. Mr. Kuyukov is one of the many survivors of nuclear weapons testing conducted at the Semipalatinsk test site. He was born in 1968, in Egindybulak Village in the Karaganda region, only 90 kilometers (54 miles) from the nuclear test site. Due to the effects of nuclear radiation, Kuyukov was born without arms.
Mr. Kuyukov overcame many challenges on his journey to secure an education and career. Ultimately, he earned a degree in accounting and also became an acclaimed artist. Now, he is continuing his lifelong work as a non-proliferation activist by serving as The ATOM Project’s Honorary Ambassador and calling on the world’s leaders to abolish nuclear testing and achieve the decades-old dream of nuclear disarmament.

Mr. Kuyukov has had a lifelong passion for art and began painting– using his mouth and legs – at a young age. “In my paintings, I try to express all the pain that nuclear weapons bring,” Mr. Kuyukov says. “I was born in the nuclear test site zone. I was born without arms, but I have the power and strength to call on the world to stop the development of nuclear weapons programs. Through my paintings and my personal experience I can tell the story of our nation as a lesson and example for other countries to follow.”

Mr. Kuyukov’s art show is scheduled to travel to Geneva, Switzerland, in November and then on to Washington, DC, in December 2012..